Welcome to the City of New Franklin.

Located in Northeast Ohio, the City of New Franklin is a suburban/rural community and home to the Portage Lakes State Park.

One of Ohio's newest municipalities, the City of New Franklin (founded as Franklin Township in 1817), is located at the southern edge of Summit County, in Northeast Ohio. It is bounded to the north by Coventry Township, as well as Barberton and Norton; by Lawrence Township, Stark County, to the south; by Clinton, to the southwest; by Chippewa Township, Wayne County, to the west; and by Green, to the east.

The 2006 U.S. Census Bureau's Population Estimate placed the City's population at approximately 15,013. The City is 26.6 square miles in area and its elevation is 1,093 feet. Compared to the rest of the country, New Franklin's cost of living is 12.38% lower than the national average.

Three major state highways, State Routes 93, 236 and 619, traverse New Franklin, with easy access to State Route 21. The City is only twenty minutes from Akron, Canton and Massillon, and forty minutes from Cleveland. Because of its central location, New Franklin affords easy access to air transportation at both Akron-Canton Airport and Cleveland Hopkins International Airport.

New Franklin has a diverse blend of citizens, who live in various districts within the City. Residents have postal codes which include Akron 44319, Barberton 44203, Clinton 44216, Canal Fulton 44614 and Norton 44203; the four local school districts responsible for educating the City's children are Manchester, Norton, Northwest and Coventry; and, some residents choose to identify their hometown as either Manchester or Portage Lakes. As a result, New Franklin has developed into "A Community of Neighborhoods," each with its own unique features.

New Franklin made the list as one of the 100 Safest Cities in America, according to The SafeWise Report which was recently released. Here is what the report had to say about the City: "This 'Safest City' screams youthfulness, from its name-New Franklin-to its history-the city is one of Ohio's youngest municipalities. Indeed, community policing efforts even include the "Juvenile Diversion Program," in which youth offenders' records are expunged in exchange for community service."To compile this report, SafeWise used the most recent FBI crime data from 2013 to analyze and rank these cities, which all have a minimum population of 10,000 people. A full list of 100 Safest Cities in America can be found at the SafeWise website. 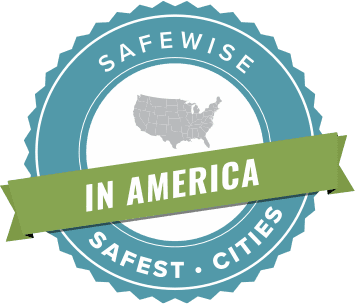