Franklin was the site of several early villages: Manchester (the first to be formed, in 1815) Savannah and Clinton (both 1816) Orradeen (1835) and Pumroy (1837.) Today, only Manchester and Clinton remain, although Clinton is now an incorporated village, outside of the township's boundaries. Many of the Township's residents are direct descendants of such early settlers as: John Sorrick, George Rex, John Snyder, Jacob Grove, John Stump, Jonathon Hamsher and John Harter.

Manchester, laid out by brothers Mahlon and Adam Clarke Stewart, was considered to be a very pleasant place to live, which is why settlers poured into the neighborhood, rapidly causing Manchester to gain quite a reputation as a prominent trading point. The name "Manchester" was chosen because the brothers hailed from Manchester, Connecticut. It would later be changed to Nimisila, which means "beautiful water," only to be changed back again to Manchester.

The primarily Pennsylvania Dutch settlers found an abundance of rich soil and water power. The Tuscarawas River afforded travel with the southern portion of the State, while Turkeyfoot Lake, named for a noted Indian Chief, was thought to be the largest body of water in the county, and attracted many hunters, trappers and fishermen. Today, this lake is part of the Portage Lakes State Park, which draws hundreds of thousands of visitors annually.

Almost every settler set out a peach orchard, raising enormous quantities, which were made into peach brandy at the local distilleries. Peaches were also dried and shipped east. Peach orchards, of a substantial size, existed in the Township until the 1930s.

Many Township "firsts" took place in 1815. The first recorded birth is that of John Johnson. Other firsts were the marriage of John Hicks and Catherine Flickinger in that same year. The first burial in the Township occurred when the wife of Jacob Balmer succumbed to a rattlesnake bite.

A small log church was erected in Manchester in 1816, and was thought to have been used as a schoolhouse, also. Joseph Mishler, of German descent, was hired as the first teacher in the Township. Currently, there are four separate school districts (Manchester, Coventry, Norton and Northwest) which serve to educate the City's children.

Itinerant ministers passed through the area as early as 1816, and held meetings in the cabins of settlers. An early minister was Reverend John William "J. W" Hamm (1800 to 1872), a Pennsylvania native and lifelong member of the German Reformed Church. Depending upon the makeup of his congregation on a given Sunday, he would preach in either English or German. Today's Grace Bible Church (the former Manchester Trinity Chapel) has its roots in this original congregation.

Upon being duly petitioned by the residents of the area, the Commissioners of Stark County ordered the organization of Franklin Township by the election of officers, in April, 1817. However, a great opposition manifested in 1840, twenty-three years later, when it was first proposed that Franklin should be severed from Stark County and made a portion of the new Summit County. The transition took place smoothly and the Yankees of the Reserve, and the Dutch, mingled happily and with mutual respect.

After the Ohio and Erie Canal was projected through the Township in the 1820s, great numbers of grist mills and saw mills were constructed. Much native lumber was sent to Cleveland for shipbuilding.

By 1830, cranberries had become quite an extensive business. Thousands of bushels of cranberries were gathered from the numerous Franklin Township marshes, and were packed in watertight barrels and shipped to Pittsburgh, Philadelphia and New York, where they were sold for one dollar per bushel.

The Township was rich in coal. Mines commenced operating in 1838, and continued for nearly a century. Mining became a thriving business and the supply of bituminous was described as "practically inexhaustible." At one point in 1881, approximately 15 mines existed, with exports of nearly 100,000 tons per annum. The largest, Beachwood Mine, was located under what is now Lockhart Field, a sports complex west of Manchester Road. Others in operation were Daily Mine, near Hampsher Road; Portage Coal Company, on Vanderhoof Road; and Brewster Coal Company and Franklin Coal Company, both near Johns Road. With the passing of coal mines around 1928, came the erection of derricks of oil drillers, as the community was situated on a great oil and gas reserve.

Prior to 1860, a well-traveled line of Underground Railroad crossed the Township to assist runaway slaves to Canada. One stopping point was the brick building at the southeast corner of Manchester Road (State Route 93) and West Nimisila Road.

Beginning with the 1940s and 50s, the Township became known as a "bedroom community" consisting mainly of housing allotments and very little retail business or industrial areas.

The community has grown to a current population of 14,963, based on the 2007 census. Numerous annexation attempts by neighboring cities, some of which were successful, necessitated the 1997 formation and incorporation of a small section of the Township, known as New Franklin Village. In 2003, the voters of both the then Franklin Township and New Franklin Village approved a merger of the two communities effective January 1, 2005. The new combined community, called New Franklin Village, officially became the City of New Franklin on March 5, 2006. 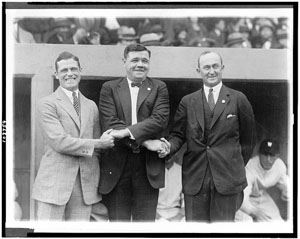 Franklin Township was home of legendary baseball great, George H. Sisler (1893 to 1973). Signed by the St. Louis Browns, in 1915, Sisler went on to play for the Washington Senators and Boston Braves. A Sharp batting eye and extraordinary fielding ability at first base led Ty Cobb to call George Sisler "the nearest thing to a perfect ballplayer." The, owner of an engineering degree, Sisler was one of baseball's most intelligent and graceful players. He won two batting titles, topping 0.400 both times, and his 257 hits in 1920 remains a modern major league record. He had a 41-game hitting streak in 1922, hit 0.300 or better thirteen times and had a sizzling 0.340 lifetime batting average. As a result, Sisler was one of the first thirteen players to be inducted into the Baseball Hall of Fame when it opened on June 12, 1939.