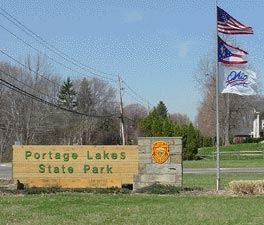 The annual Portage Lakes Fireworks Display, which draws hundreds of thousands of people to the area each year for Independence Day, can be viewed best from the beaches of Turkeyfoot Lake. The Portage Lakes Boat Parade, calls for boat owners to decorate their boats - and, sometimes, themselves - according to each year's theme.

The Portage Lakes, themselves, were formed as a direct result of glacial activity, when huge chunks of ice broke off the retreating glacier and melted into depressions forming kettle lakes. They were named for the Indian portage path that connected the Cuyahoga River, flowing north to Lake Erie, and the Tuscarawas River, which through the Muskingum, flows south to the Ohio River. The area became an important trading post for settlers and Indians. It was a recognized landmark during the War of 1812, serving as a rendezvous point of American troops. The old Indian portage route was part of the ancient boundary between the Six Nations and the Western Indians. Additional information can be obtained by visiting the Ohio Department of Natural Resources website.